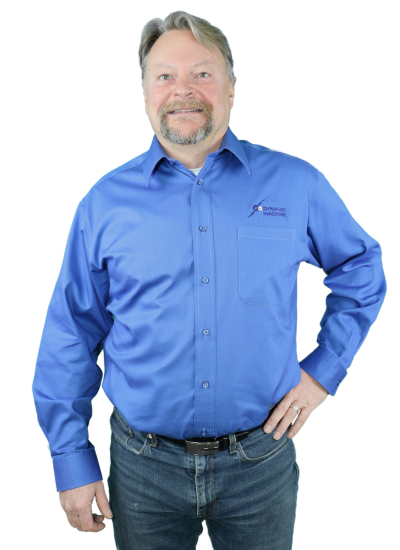 Try finding someone more committed to seeing their business succeed than Richard van den Broek. (Don’t waste your time. You probably can’t.) He has a reserved, sophisticated demeanour that may be intimidating to some, but behind that is someone incredibly knowledgeable and passionate about what he does.

Richard has been with Dynamic Machine for 15 years and is as enthusiastic as the day he started. Leading a company like Dynamic was his dream job and he took a gamble when he left his previous job for this one. First employed as the company’s controller, he soon got promoted to General Manager and then President and CEO, thanks to his dedication and enthusiasm. He still gets excited about landing a big new project, seeing his team find a solution to a particularly tough problem, and finding new ways for the organization and its staff to succeed.

As much as he loves being a leader, the job is not without its challenges. His decisions affect everyone and it’s not always easy to balance the needs of his team with what’s in the best interest of the company. But he does his best and we think he’s doing great.

So how does someone like Richard shake off the stressors of the job? Golfing, cycling, and ATV-ing are some of his favourite summertime activities while winter is reserved for snowmobiling and curling. He might also be that guy you see riding his motorcycle when it’s raining or cold or entirely inappropriate to do so. He’s always said he would ride his Harley year-round if he could!

Since day one, Richard’s vision has been to turn Dynamic into a state-of-the-art manufacturing and service company for the industrial sector. Through mergers, acquisitions, and innovative growth strategies, he’s done just that. We can’t wait to see what comes next! 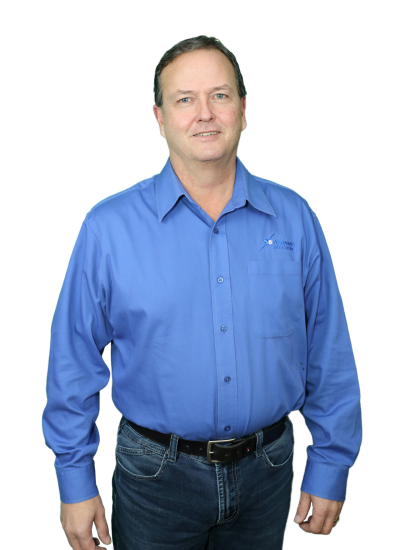 In the ten years that Everett has been with Dynamic, he’s worked tirelessly to learn the ins and outs of the company. He started as sales manager then served as the head of two different departments before becoming General Manager.

Everett’s boundless energy serves him well given the quantity of tasks he attends to on any given day. He multitasks coordination of projects on and off-site, coaching his teams at three different facilities, seeking out new opportunities, troubleshooting, and much more. It’s surprising his photo turned out as well as it did, given that he’s usually no more than a blur running past your office on his way to the next task.

He thrives on working with people and never backs down from a challenge. He recently oversaw the expansion of Dynamic’s machine shop, and though it pushed him outside his comfort zone, it’s led to greater capacity, efficiency, and enhanced capabilities for the company.

In his spare time, Everett loves being at home with his family and his dog, Ned. He recently completed a basement remodel (in record time, of course), motivated by the impending winter and all the time he’ll spend indoors when it’s too cold to be outside.

He’s a busy guy, but always has time to help others and express his appreciation. He never loses sight of all he has and says he’s “blessed, grateful and thankful” for all of it. 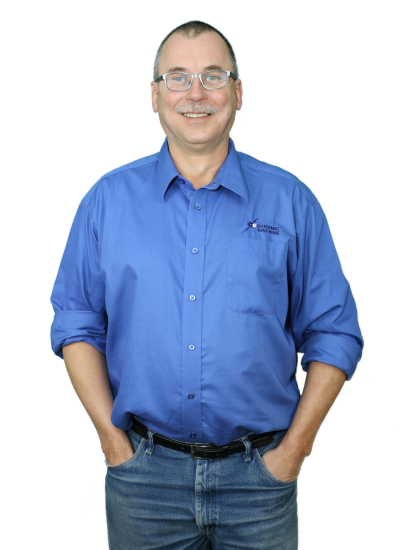 As the man responsible for overseeing our 50,000 square foot machining facility and coordinating 30-ish employees, Gary has a lot on his plate. When you have that much responsibility, it can be easy to focus all your attention on planning and troubleshooting and meeting deadlines. But Gary knows there’s something just as important—his team.

After more than 40 years in the industry, and 25 of those in management, he’s developed a simple, but not always obvious, formula: focus on the people. Gary works hard to earn the trust and respect of his staff because at the end of the day, he knows that their talent and dedication are what will help him accomplish the shop’s goals.

While Gary is committed to putting in the time necessary to ensure his team’s success, he also knows that part of being a good leader is maintaining a work/life balance. Away from the shop, you’ll find him spending time with his wife and family, including four beloved grandchildren, or on the golf course.

See what Gary and his team can do for you! 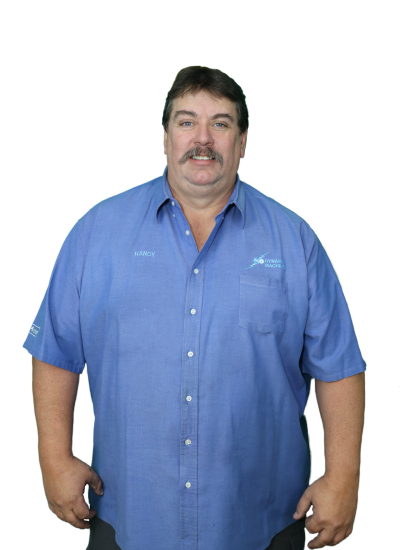 Randy’s days are always busy and never the same. To some, that might sound awful, but to him, it’s the best-case scenario. He’s a classic Libra who loves a challenge—tell him he can’t do something, and he’ll work hard to prove you wrong. That type of tenacity is ideal for someone who spends his days solving problems, juggling deadlines, and managing an inventory of more than 5,000 hydraulic parts!

Randy is goal-oriented and loves finding new ways to promote his department and its capabilities. He’s been integral to building our agricultural product line and has more than 30 years of experience specific to this area.

When he’s not at work, Randy enjoys wilderness pursuits like fishing and hunting. You can also find him kicking back, watching the game. Which game? Pick one! He likes them all.

Get in touch with Randy and his team when you need hydraulic parts! 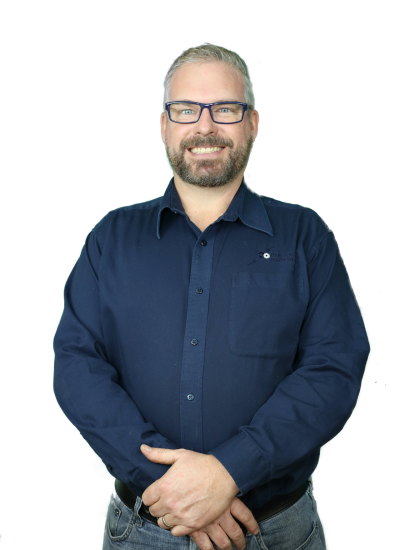 Jayson (known around here as Jay) started off in our shipping and receiving department in 2004. A couple years later, life took him in another direction, and we begrudgingly had to say goodbye. Thankfully, he came back in 2010 and has been with us ever since.

After his triumphant return, Jay worked his way through sales, design, and tech support before finding his home as Service Manager. Here, he oversees our talented fluid power team. The number of people who have him on speed dial is astronomical, but you can’t blame them. He can always find the best solution and is always eager to help customers and fellow staff.

His passion for all things mechanical follows him home where he spends his free time building custom bikes or doing high performance upgrades to small engines. He’s also started a small hobby farm with his family where they raise chickens, quail, and rabbits.

Learn more about how Jay and his team can help with all your hydraulic repair and maintenance needs. 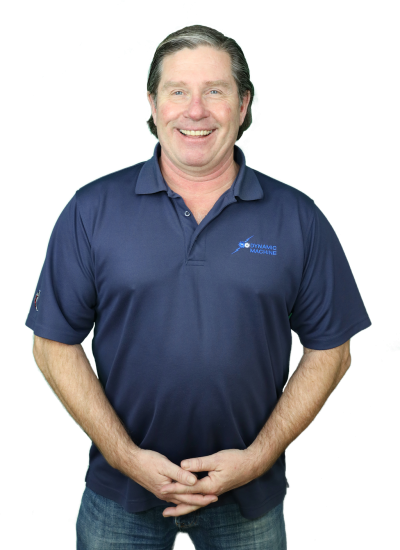 Chris Trigg is a compressor expert and a man of controversial taste. Exhibits A and B: his favourite hockey team is the Toronto Maple Leafs and he’s never watched Game of Thrones. Not one single episode. He’s a great asset to the team though, so we’ve decided to keep him around.

Chris started as a sales rep in 2014 and now leads our air compressor and nitrogen generator division. He and his team spend their days problem solving and generating (get it?) the best solutions to help our customers.

If you’ve got a compressor or generator project in mind, Chris is your guy!

Find out more about our pneumatic power division. 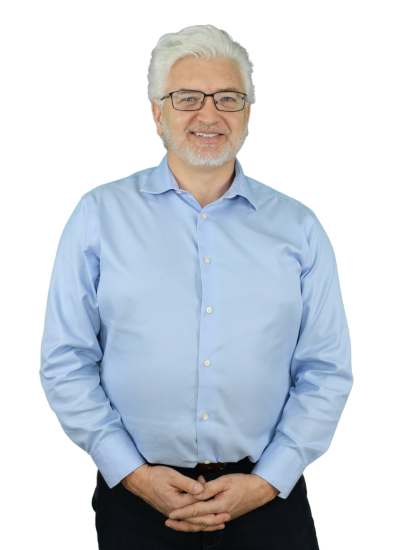 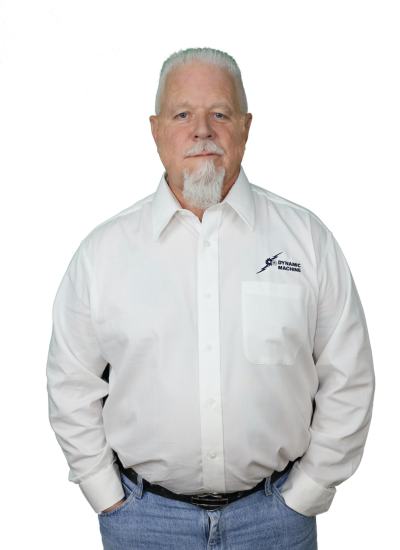 Barry has been with Dynamic Machine since 2018 and specializes in hydraulic and machining sales. He likes spending a lot of in-person time with his customers to help them find the best solutions based on their project and budget. This approach has led to strong business relationships and lasting friendships with many of them.

When the pandemic hit and his in-person meetings were off the table for a while, Barry had to shift gears and find a new way to communicate Dynamic’s service offerings. He took all the information about Dynamic Machine & Fluid Power and turned it into a concise handout, known as a line card, that he was able to share with prospective customers.

When he’s not working with his customers, Barry spends his time riding his custom Harley Davidson and Indian motorcycles, or supporting the Winnipeg Humane Society, Wildlife Haven, the Animal Food Bank, and the Winnipeg Pet Rescue Shelter. He’s even found a unique way to combine these two passions by organizing charity rides to raise money for the various animal charities he supports. 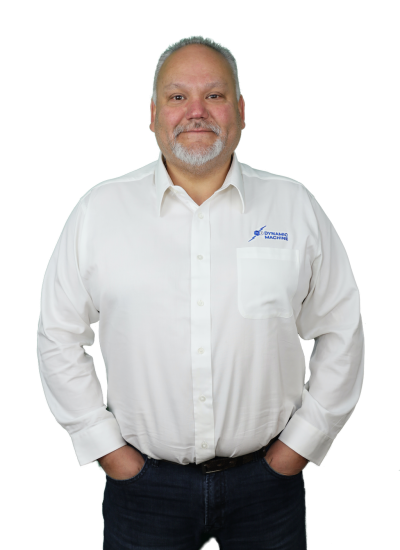 It’s a great feeling to see a project through from start to finish and have your customer tell you how much they appreciate your work­—and it’s a feeling Brad knows well.

As a veteran of compressor sales and service, he knows how to take care of his customers. Having your equipment malfunction or breakdown can be very stressful, but Brad is great at reducing that stress and getting you back up and running. Plus, he’s fun to be around!

Brad works closely with our compressor technicians to learn the ins and outs of the equipment so that he can recommend the best solution. He’ll also monitor the progress of your job and make sure you’re happy with the result.

Ask Brad about muscle cars and you’ll have a friend for life. When he’s not working hard for you, you’ll likely find him working on his 1970 big block Monte Carlo. 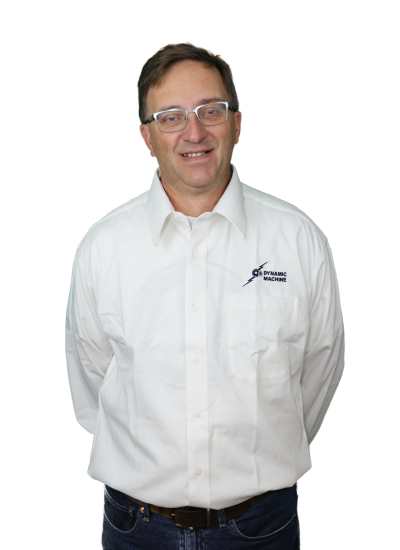 Dory is a soft-spoken guy with a heart for helping others. Prior to joining Dynamic in late 2019, Dory had a long-time career in the non-profit sector, working with at-risk youth. He’s also spent the past 25 years volunteering alongside his wife who coordinates the Young Parents program in Winnipeg.

Like so many on our team, he thrives on building relationships and getting to know people. Earlier in life, Dory ran a factory that produced hydraulic hoses and also has experience with tooling. So, he definitely knows his stuff!

Throughout his career in the non-profit world, he dealt with high stakes situations and managed difficult interpersonal scenarios every day. It was his calming presence that made him successful then, and it still serves him to this day. When crises arise with your equipment or project, you can be sure Dory will be the guy you want next to you, helping you find a solution. 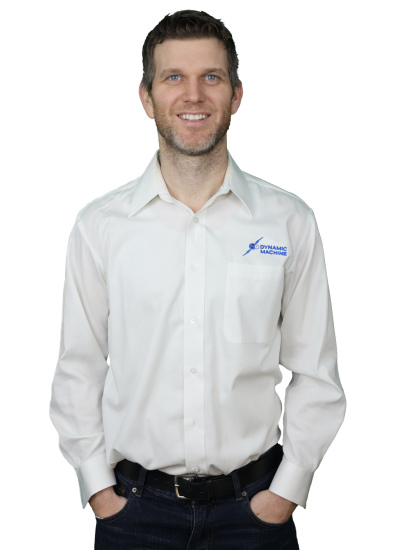 An outside sales rep for Dynamic since 2019, Perry is a journeyman millwright by trade, a fantasy football fanatic, and a devoted family man.

He grew up on a farm north of Winnipeg and spent his days working with farm equipment and machinery, which drove his interest in becoming a millwright. After completing his training, he went on to manage the millwright and overhead crane division of an industrial construction company. Now, that experience now serves to give him an understanding of his customers and how to best help them.

Perry’s success in sales can also be partially attributed to his extroverted nature. Whether he’s engaging in friendly small talk or having deep conversations about life, chatting with friends, colleagues, or customers fuels his days.

What else fuels him? An ice-cold shower every day. He swears it’s good for the nervous and immune systems. And if any of you are thinking, What’s the big deal? I’ve taken cold showers before! he wants you to know, there’s a definite difference between intentionally taking a cold shower and simply running out of hot water. If you ever decide to give it a try, let him know what you think!